This post may contain affiliate links (at no extra cost to you). Please read our disclosure for more information.

Located south of Seoul in the Gwanak-gu District, Mt. Gwanaksan (관악산) is one of the most popular day hikes in the area with about a half-dozen peaks that precede the summit.  While some routes are harder than others, it’s generally a quite manageable climb and we saw plenty of older Koreans making better time than we did!

Unfortunately, I did not write down the specific directions on how we actually got to the trailhead but I found some great ones over at Reverse Retrograde that I am going to repurpose here: 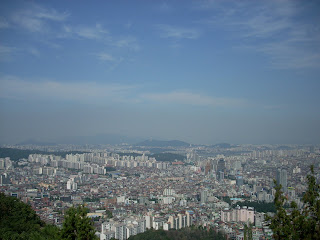 I want to preface this section by stating that we did not pick the easiest route and used directions different than the ones listed above – our climb was likely much harder than it had to be.

While we anticipated the almost 3-hour hike to the top, we did not anticipate the handful of sections where hikers became climbers and had to use ropes bolted into the rock to prevent falls.  I’m not kidding, at least 5 times we had to take hold of thick ropes or heavy chains to keep from falling down a steep slope or off of an almost impassable narrow ledge – the hardest of these was the last push to the top where we had no more than 6 inches to put our feet on, only a chain to steady us, and then had to hoist ourselves over the last big rock to get to the top.

Although my legs were exhausted the rest of the week, I don’t regret a bit of it. Along with some amazing views, it was nice to get the pollution and experience what so many other Koreans enjoy. Most Koreans love hiking and the outdoors and as I mentioned earlier, quite a few older men and women passed us at a pretty fast pace while we were trying to decide whether or not to attempt some of the roped sections.

A few cool things we saw on our hike: it was once feared that North Korea would try to surround Seoul and hide in these mountains so the South built bunkers everywhere. They were almost always surrounded by barb wire but occasionally we would see one that had been broken into or collapsed. Heres a pic of an open one: 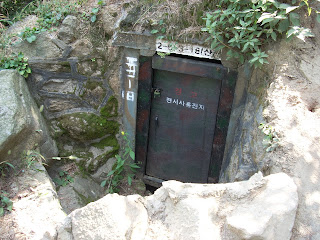 We also saw about 4 helipads throughout the hike, mostly located on the ridgeline. We couldn’t read the signs so I’m not sure whether or not they are for injuries or the army.

Finally, and perhaps the most impressive, there were people selling things on the mountain! We saw two people with cooler shaped packs that had ascended the same way we had, both of them selling ice cream (though no water, FYI).

In the end, we took an easier way down from the summit, party to save our legs and partly because we didn’t want to have to use the ropes again.

While the mountain is open all year round, the most idyllic time to hike is in the spring when the cherry blossoms are in full bloom and the cold weather has tapered off.  If you do decide to head up there during winter please dress accordingly – it can be significantly colder at the summit when compared to the base.

As mentioned earlier – there are people randomly selling things on the mountain but you will pay a premium (and we didn’t see any water).  Our advice is to stock up at a store outside of the metro and bring enough liquids and snacks for the entire trip – it only took us 3hr to get up using the hard route so you don’t need too much.

If you’re hiking in the summer make sure to bring a hat and sunscreen – much of the hike is on an exposed ridgeline and the sun can be brutal!

Avid traveler, dog addict, caffeine abuser. I started Girly Travels as a place to document my adventures and it's evolved into what you see now: a labyrinth of travel guides, packing lists, and gear reviews. My hope is that you enjoy reading it as much as I enjoy living it!

The Girly Travels is reader-supported and earns money when you click on links and make purchases.  This does not impact the quality of our content and we strive to make every post unbiased so you can make the best choice for you!